From FountainPen
(Redirected from Celluloid)
Jump to navigation Jump to search
This page is a translated version of the page Celluloide and the translation is 100% complete.

A Vacumatic with a very tansparent celluloid

Celluloid is a material invented around 1863,[1] produced from the processing of nitrocellulose and pigments in a solution of camphor and ethyl alcohol. The material when heated (about 60°) becomes malleable and may be bent and also molded; for this is considered as the first thermoplastic resin produced.

Celluloid is an elastic material and it is shatterproof, shock resistant and waterproof. Its origin stems from the search for a replacement for billiard balls production, but was soon used for many other applications, such as combs, knife handles, and especially as support for photographic film. Today, apart from some fountain pens, is used for ping pong balls and guitar picks

Celluloid can be a very durable material, but it requires a rather lengthy process in particular for drying that allows you to remove residual moisture from the material. If this does not happen in fact it can give undergo a crystallization, becoming extremely fragile. Another common problem with celluloid pens is the discoloration, present mainly in the lighter colors such as pearl or jade green; this is typically due to the release of sulphurous gases from the rubber sacs. Furthermore, the celluloid is extremely flammable, and is not the case to heat a celluloid made pen with an open flame.

The celluloid name was the trade name given to this material from the first producer, the Celluloid Manufacturing Company, which held its trademark rights; so in the following years it was called, especially by fountain pens manufacturers, in many different ways: Radite by Sheaffer, Permanite by Parker, Pyroxalin by Eversharp, Aurolite from Aurora, Coralite by Carter ...

In addition to the direct use, celluloid lends itself to combination with other materials, in particular Carter realized a characteristic iridescent material, named Pearltex, combining the celluloid with nacre. A similar effect is in celluloid called Abalone by Sheaffer. 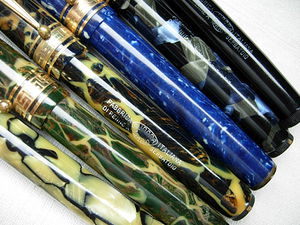 For its mechanical strength, for beeing unbreakable and waterproof, for ease of processing and above all for the almost infinite capacity of being made in different colors and patterns (a classification is in this page) from the mid '20s celluloid became the main material used by fountain pens manufacturers and it remained so until the '40s when the plastic resin started to spread.

Although some book reported that the celluloid was introduced on the market by Sheaffer actually the first American company to have used it extensively in its production was LeBoeuf, who used it for its fountain pen starting from about 1920 thanks to a patent (nº US-1302935) for the production of pipes in this material, the Conway Stewart contends this leadership, asserting that they were the first manufacturer to have produced (still in those years) the first pen in celluloid.

In fact, there are references to the production of celluloid pens up since 1905[2] but in this case it is still black celluloid, and not the one made in multiple colors and patterns which will become the most significant material from the second half of the 20s.