From FountainPen
(Redirected from Ink blot)
Jump to navigation Jump to search
This page is a translated version of the page Ink blot and the translation is 100% complete. 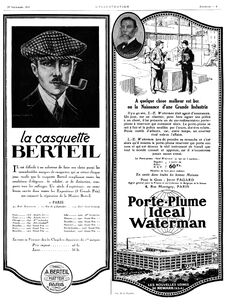 The Ink Blot name is usually referred to the story about the origins of the Waterman Pen Company telling that Levis Edson Waterman started his own business as a fountain pens manufacturer after losing a lucrative insurance contract for the blot caused by an ink loss from a malfunctioning pen. According to this story instead of getting angry the company founder was interested in that object, discovering the reason for the malfunctioning and solving it by creating narrow channels on the feeder. The success of his invention, tested by his friends and acquaintances would have driven him to create his company.

The story seems to have first appeared in 1921, (and the advertisement alongside that bears witness to an example is from 1924), but was revived with pomp and circumstance in 1934 in celebration, a year late, of the fiftieth anniversary of the company's birth. In fact several subsequent studies (see this article by David Nishimura) have shown that this is one of the classic fake histories created by advertising departments, because there is no record of these facts in a company's official history published in 1904. Despite this, the Ink Blot fake history is still present in many texts and books on fountain pens. A deep and detailed Waterman early history reconstruction can be found in this long and documented article by George Rimakis and Daniel Kirchheimer.