From FountainPen
(Redirected from Omega A.V.M.)
Jump to navigation Jump to search
This page is a translated version of the page Omega A.V.M. and the translation is 100% complete. 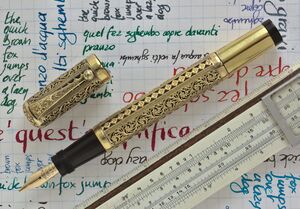 In 1927 the two Verga brothers, Alfredo and Eugenio, who until then had brought together the "Alfredo Verga dei Fratelli Verga Snc", owner of the Columbus trademark, parted. Eugenio become the owner of the Columbus brand, while Alfredo founded his new company in Milan, via Rugabella 9, that took the name of Omega A.V.M. (registered in the same year, Reg. Gen. N. 35467) where A.V.M. is an acronym standing for Alfredo Verga Milan.

Although there are no registration aboit it, there are strong indications that the company was also the maker of the Ardita brand, a minor brand used in economic productions, because pens were found being branded Ardita A.V.M., [1] characterized by the same acronym, and then resulted in further discoveries[2] to be equipped with a nib marked Omega A.V.M., which leads us to think that this trademark was used by the company for its low-end production.

At least initially, it is believed that the company has maintained the production of safety models with precious metal overlays typical of the Columbus initial production. A mid-range production was marketed under the brand Vega, to which was added the name "Ideal Fountain Pen" o "Ideal Super Pen". These models were followed by celluloid button filler models called Supernova, and later also with lever filler. The information about this company are quite slim, but the production seems to be continued even after the war, with imitations of American models, in particular, is known a version of Supernova with a clip very similar to that of a Skyline and a wide band on the cap like the one found on certain Crest and Tuckaway models.