From FountainPen
Jump to navigation Jump to search
This page is a translated version of the page Cervinia and the translation is 100% complete. 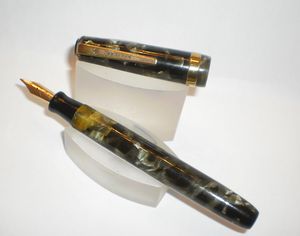 The "Fabbrica Italiana Penne Stilografiche Cervinia" can be traced back to the activities of Giuseppe Carboni, owner of the shop "La stilografica" in Via XX Settembre, 9 in Turin. The activities began in the second half of the 1930s, at least from the 1936, the year of the trademark registration (Reg. Gen. N. 54083) by Carboni, but the brand is not mentioned in this 1940 guide, where only the shop appears with headquarters in via Nizza, 1 with Carboni mentioned as the owner. The shop appears at the same address, without the name of Carboni, also in the same guide of 1948 the where however, the "Fabbrica Italiana Penne Fountain Pens - Cervinia" with headquarters in Via XX Settembre, 9, also in Turin, is explicitly mentioned.

Production of Cervinia pens is referred to a possible collaboration with Montegrappa for both the stylistic affinity, that for the discovery of sample in white/red cardboard boxes similar to those used by the latter for the Domino models, but as often happens in these cases there are no documentary confirmations. It consists mostly of midrange celluloid models, with a clip bearing the brand name engraving.

Is attributed to the activities of Giuseppe Carboni also the production, located in the '40s, of the fountain pens with the Royal trademark, recorded in 1946 (Reg. Gen. N. 88945) as The Royal Pen. These are pens bearing the Royal name engraving on the clip and on the nib, and the Royal Pen - Patented imprint on the body. It is not clear whether there is a relationship with the brand The Royal previously recorded by Uhlmann's Eterno (Reg. Gen. N. 14896). These are economic pens, aimed at the student market, but produced in beautiful ringed celluloid and still of good quality. In particular are very interesting and well-made the ​​Vacumatic copies produced with this brand, for whose origins there are conflicting versions.[1]