From FountainPen
(Redirected from Omas)
Jump to navigation Jump to search
This page is a translated version of the page Omas and the translation is 100% complete.

OMAS was founded in 1925 and is one of the historic Italian fountain brands. Since then, albeit with mixed success, and with several changes of ownership occurred after the death of its founder, it has always remained active in the fountain pen market. Ownership passed to the French Luis Vuitton company in 2000, and then in October 2007 they sold it to the Chinese company Xinyu Hengdeli, in March 2016 it ceased activities.

In its activities OMAS has been characterized by a remarkable capacity for technical innovation and product quality, resulting probably from these point of view better than any other Italian company. It cannot be said, however, that it has particularly excelled for innovation in design, because all its most famous models, also if they often are better quality than the originals, always show in a clear manner a high rate of imitation of the stylistic features of other brands models. Despite this, the quality of the OMAS production, the ability to create imitations that are better than the originals, and in particular the refinement of its celluloid models makes this brand one of the most sought after by collectors.

OMAS was founded in 1925 in Bologna by Armando Simoni, but it was from 1919 that Simoni, just married, had opened a workshop in Via S. Vitale where he produced film reels and mechanisms for safety pens.[1] Briefly the workshop began to produce pieces and parts for fountain pens of the leading companies. Having obtained considerable success, customer demand grew, and Simoni started expanding the company and also began to produce whole pens. These early years models are hard rubber lever filler or safety pens, made as a clear imitation of the Waterman models. 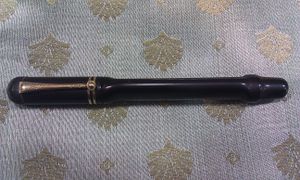 But it was only in 1925, after having completed the construction of its own factory in Via degli Orbi, that Officine Meccaniche Armando Simoni were create, whose acronym, OMAS, will become the brand used for the marketed fountain pens. The first relevant model produced by OMAS was the "penna del dottore", patented in 1927, was an hard rubber lever filler model with a compartment located inside the barrel of the pen that contained in addition to the sac and the lever mechanism, a thermometer for measuring the fever, kept separate from the rest by a metal partition. The same year Simoni patented the metal joint used for the construction of the OMAS desk pens, for which the company becomes one of the leading Italian manufacturers.

The initial OMAS production of is characterized by various Flat top button filler models, clear imitations of the Duofold. However some of these models were characterized by original technical solutions, as for the second version of the "penna del dottore" in which again the thermometer was hosted by the body of the pen, or as for the "penna del calligrafo", which was equipped with a special section that could be easily unscrewed, allowing an easy the change of the nib type, which was directed towards the use by calligraphers. 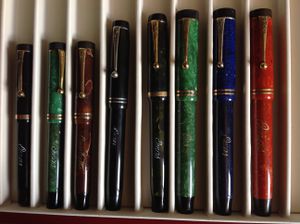 In this same time period there is a presence in Italy of some Parker models (Duofold and Thrift Time) marked "Geo. S. Parker - made in Italy" whose production is attributed to OMAS. There is a debate about these pens, whether if this can be considered a real production commissioned by the Parker, to circumvent the restrictions imposed by the autarkic policies of the fascist regime, or if it is a semi-official production commissioned by the Parker agent for Italy, Edoardo Russo Webber, who was facing a supply shortage, or if it is indeed a clandestine (and illegal) production. As there are no documents, nor other findings than those of later interactions from Webber and Simoni for the production of the Saratoga pens, it's impossible to come to any definite conclusion.

OMAS between the first Italian companies to switch to celluloid in the late '20s or early '30s, producing its fountain pens as well as in the classic colors like green jade or lapis lazuli and also interesting variation of marbled colors. Between the production of this time there are some celluloid pens, with cap and clip similar to that used in the previous Duofold imitations, but having instead tapered ends. These were probably born in the early '30s, following the establishment of the streamlined style, and only a couple of samples are known. More or less in this period can be traced back the production beginning of the Minerva branded pens, the only real OMAS sub-brand,[2] dedicated to the production of second-tier but not less than excellent quality. 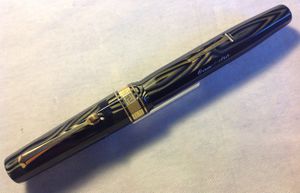 An Omas Extra in arco celluloid

The real turning point in the OMAS production happened in 1932, when it introduced what is was for several decades one of the top models of the company, the Omas Extra, made of faceted celluloid, a lever filler model with a very large cap band, decorated with a greek pattern. The pen was produced in four different sizes and launched with the slogan the creation of an artist and a scientist, and it was accompanied by a very extensive advertising campaign.

Although the Omas Extra is very similar to Doric, introduced a few months earlier, the question whether it is an imitation is still controversial, since the elapsed time is rather short. The OMAS fans argue that, given the short time between the release of the two pens, it would not have been possible to create production facilities if the Omas Extra had been a Doric imitation, but there is no information to support this statement while there are ample confirmation for the OMAS tendency to imitate American models. Regardless of whether it can be considered an imitation or not the Omas Extra for its quality of materials and workmanship, can be considered of equivalent, if not higher, quality than the model to which it may be have inspired. The pen also had a huge success and remained in production until 1946, albeit with minor stylistic changes, such as creating a smooth version and the transition to a decorative three-ring instead of the greek band.

In 1936 a new model, the Lucens, was patented and launched, using, at least for Italy production, a new type of filling system called "stantuffo tuffante". In fact the mechanism is almost the same of the one used by Dunn 15 years before; but it is not possible to determine whether it is a copy or an independent realization. Nevertheless the Lucens constitutes one of the most beautiful fountain pens ever realized, in particular for the beauty of celluloids, equipped with transparent sections for viewing ink.

Made initially onlu in the in smooth round version, the Lucens was joined immediately by Extra Lucens, havingfaceted body like the Extra, but still using the "stantuffo tuffante" filling system. In 1938 the wheel clip (very similar to the Doric one) was replaced by an arrow shaped clip, a clear imitation of the one introduced by the Parker with the Vacumatic. The imitation even more evident by the presence of a arrow engraving of the nib, almost identical to the Vacumatic one. Also the greek band cap decoration was replaced by three thin rings. Despite the imitations Extra Lucens is a pen without a doubt superior in all aspects (technical, aesthetic and manufacturing quality) to any Vacumatic and probably is the best model ever produced by OMAS. 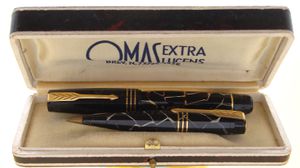 With the World War II progress raw materials began to become scarce and to replace gold for nibs, as the majority of European companies, OMAS had to resort to use some steel alloy. The company named it Permanio, and declared the it would be better even than gold. In fact just this kind alloy proved, amongs many other used for nibs, to be one of the most susceptible to corrosion, so that today Permanio nibs are rare and have a much higher value of their analogues in gold.

After the war production resumed with new ogival pens and the transition to piston filler. In 1946 the Extra line was completely restyled, the wheel clip was maintained but were used three rings on the cap. Also the piston filler was adopted and a transparent section for viewing ink level was introduced. Three sizes were maintained: small, medium and large, identified respectively with the numbers 555, 556 and 557. 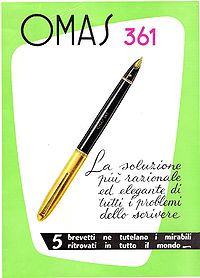 In 1948 it was made what is perhaps the most significant invention in the Italian fountain pen production, the 361 model. Born as a response for the success of Parker 51, the originality of the pen is in the central position of the nib, mounted on the axis of the pen, around which is placed an hood open by one side. Depending on the side of use of the pen, when the nib is almost completely covered it will give a rigid writing, and when it is left uncovered, it will allow a flexible writing. It was very functional grading system, so that it is told that the Parker tried several times to acquire the patent (nº US-2565667) from OMAS. 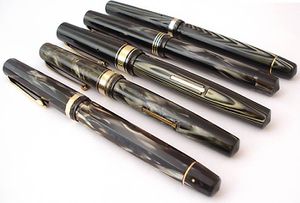 The introduction of 361 led to a series of novelty even on the stylistic side other than in the technical one. For its production were used the new ogival shapes, and also cap decoration passed to a single band, and the piston filler was adopted, which was used for all the production except the Extra Lucens who stayed with the "stantuffo tuffante", the arrow clip and the three rings on the cap, remaining in production, without double color nibs, in all black and in medium and large sizes for all the '50s.

It should also mentioned two models introduced about 1950 and remained in production for a short time, the 351 and 352. These pens are very rare and hard to find, they have faceted shape and piston filler and they barrel was made by gluing alternating sections of transparent and colored celluloid, so as to achieve an outstanding result of a transparent tank in alternating sections.

In the same period of the 361 ogival shaped were adopted for other models and led to the Lucens Ogiva and new ogival versions of the old Extra model (called 555/S, 556/S and 557/S), These were celluloid made with a red or yellow transparent window, and there were also variants with metal cap. The faceted forms were also kept, for both the 361 and the new Extra series with models denominated 555/F, 556/F and 557/F.

In the following years OMAS production continued with the construction of piston filler celluloid pens. The company produced new models like the VS and the CS. With the death of Armando Simoni in 1958 no more significant innovations were produced, although in the following decades the company introduced many different models, trying to chase first the economy tier and the the high end of the market. The company changed hands from the Simoni heirs and was sold first to Luis Vuitton and then to the Chinese Xinyu Hengdeli remaining active until March 2016, when it ceased activities.